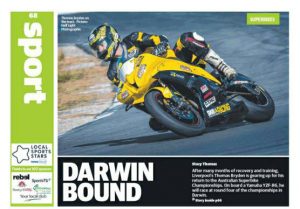 LIVERPOOL’S Thomas Bryden is gearing up for a long anticipated return to the Australian Superbike Championship (ASBK). Earlier this year, Bryden suffered an unfortunate pre-season injury leaving him sidelined for first 3 rounds.After months of recovery and training, Bryden on board a Yamaha YZF-R6 will race at Round 4 of the championship. It will be the first time Bryden and team mate, Cambridge Olivier, race side by side in the black and yellow. Despite Bryden sidelined due to injury, it did stop him from contributing to Cambridge’s performance at the last three rounds. Bryden acting as a mentor and technical assistant for Olivier was a crucial asset to his results. Olivier currently sits 12th in the championship after finishing in 8th position at Winton Raceway.

“” I look forward to getting back to racing it been 8 months since my last race, I am excited to get back on the Yamaha R6 and get my confidence back. There has not been a race in Darwin since 2013 and it a track well-liked by a lot of the competitors. I am excited for some good close racing! ” Mr. Bryden says

Thomas began riding at the age of 10 and commenced racing professionally in 2010. For the last 5 years, being a privateer racer, a majority of income from work went directly to pursing a childhood dream. Despite battling injuries and sponsorships over the years, consistently finishing around top 10 each season, demonstrates the full potential that has yet to be unleashed. Sydney West Riders Racing team managers Kevin and Steven Lam, seeks to promote motorcycle racing by placing Western Sydney in the national stage but importantly, motivated to assist Bryden and Olivier a pathway into the international arena,  a dream for all competitors.

“Half way into the debut season has proven to be a huge learning curve for team. It also provided a deeper insight into motorcycle racing. It is tough. To be competitive, a significant amount of finance, manpower, technical knowledge, time commitment and preparation are required. All-important necessities we hope to develop further as time progresses. ” Mr. Lam says