Posted at 07:00h in Media Release, Racing News by Kevin Lam
1 Like 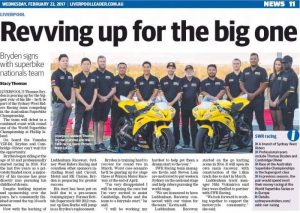 Thomas Bryden is gearing up for the biggest year of the Australian Superbike Championship. Western Sydney’s largest motorcycle community, Sydney West  Riders in partnership with upcoming motorcycle track, Luddenham Raceway will debut as SWR Racing at the highest national competition next week.  The team will debut in a combined event with Round 1 of the renowned World Superbike Championship at Phillip Island. On board the Yamaha YZF-R6 racing machine, is local talent Thomas Bryden and Cambridge Olivier.

Thomas has begun riding at the age of 10 and commenced racing professionally in 2010. For the last 5 years, being a privateer racer, a majority of income from work went directly to pursing a childhood dream.

Despite battling injuries and sponsorships over the years, consistently finishing around top 10 each season, demonstrates the full potential that has yet to be unleashed. Now with the backing of Luddenham Raceway, Sydney West Riders Racing and numerous sponsors such as Road & Circuit, Motul and RK Chains, Thomas is preparing for greater success this time round. However, the anticipated start has been halted due to pre-season training injury.

Former British Superstock 600 2012 runner up Ben Burke, will be jumping in as Bryden’s replacement. “I am very disappointed that I will be missing the race but I am very excited to assist Cambridge, Burke and the team to a fairy tale start with great results. I will be working my hardest to try help get them a dream start to  the year” Mr. Bryden says

Sydney West Riders Racing team managers Kevin and Steven Lam, seeks to promote motorcycle racing by placing Western Sydney in the national stage but importantly, motivated to contribute to the dreams of riders pursing the world stage. “Likewise with Thomas, although we are not racing the bikes, we are happy to be part of something special. We also are greatly honoured to have Luddenham Raceway connected with our vision for the team” Mr. Lam says

Luddenham Raceway a family-owned complex, launched into the scene with go-karting in 2014 and paintball facility late last year. Nonetheless, that was just the beginning. The track from City of  Penrith will be opening their very own main raceway in 2017, with construction of the 1.4km track due to commence in March. The track will provide a new location for motor sport events, corporate functions and driver training. “We couldn’t be more thrilled to partner with Sydney West Riders Racing and look forward to working together to support the motorcycle community. Kevin, Steven and Thomas are excellent examples of youth in the community doing great things to benefit others and it will be a pleasure to support them in their endeavours” commented by Luddenham track manager, Niki Vukmirica. 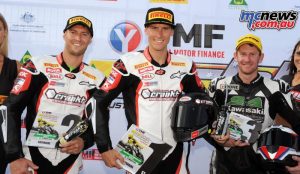