Ride for Youth Off The Streets

12 Jan Ride for Youth Off The Streets 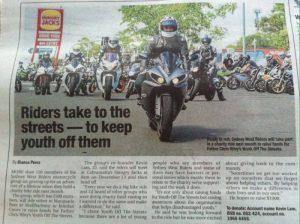 MORE than 150 members of the Sydney West Riders motorcycle group are gearing up for an adventure of a lifetime when they hold a charity bike ride next month. The group, which has 2500 members, will ride either to Macquarie Pass at Shellharbour or Jenolan Caves to raise funds for Father Chris Riley’s Youth Off The Streets.

The group’s co-founder Kevin Lam, 22, said the riders will meet at Cabramatta’s Hungry Jacks at 9am on December 13 and then head off. “Every year we do a big bike ride and I’d heard of other groups who were doing charity fund-raising so I wanted to do the same and make a difference,” he said.

“I chose Youth Off The Streets because there are a lot of young people who are members of Sydney West Riders and some of them may have barriers or personal issues which enable them to relate to the charity we’re supporting and the work it does.

“It’s not only about raising funds for Youth Off The Streets but raising awareness about the organisation that helps disadvantaged youth.” He said he was looking forward to the ride but he was more excited about giving back to the community.

“Sometimes we get too worked up on ourselves that we forget about helping others. By helping others we make a difference in their lives and in our own.”He hopes to raise $1000.