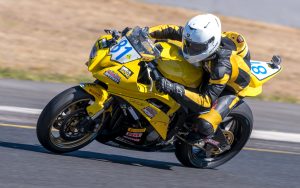 In Race 1, Cambridge launched well into Turn 1 but a small moment to avoid any mishap mid Turn 2 pushed him back to 13th. Cambridge climbed back battling with Brian Houghton before almost catching Chris Quinn to finish in 10th. In Race 2, Cambridge finished in 12th with best time for his weekend, 1:38:719. Thanks to Josh Hall for coming out to support!

In terms of the overall championship, Cambridge finished the championship in 9th place. This is a massive effort for a privateer rider competing in all 7 rounds with minimal budget. On top of this, against best riders and more well funded teams in the nation. Thomas Bryden concluded the season with an overall 27th position. Thomas confronted by injuries and limited racing budget, was only able to complete 2/7 rounds. Despite the challenges faced, Well done to both, the team and the sponsors! Also congrats to Joshua Waters and Suzuki Australia taking out the 2017 Australian Superbike Championship Crown!

After eleven laps, Cambridge managed a time of 1min 39.546 on the sixth lap. Unfortunately, Cambridge’s chain got thrown off ending his session early.

Cambridge Olivier will seek vengeance after experiencing bike issues back in February at the season opener!