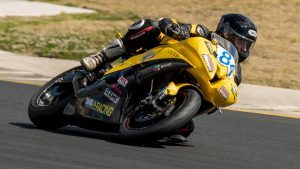 Round 6 of ASBK – Australian Superbikes Championship at Sydney Motorsport Park wraps up.

The morning started with an independent hearing on Cambridge’s penalty (see previous post). The final decision was fairly justified and therefore unfortunately, resulted in Cambridge having to start both races in 24th position (rear of grid).

In Race 1, Cambridge fought to 15th place and Thomas Bryden finished in 12th from 11th. Race 2, the results improved. Cambridge climbedup an astounding 13 positions to end with 11th place.Thomas also put in a great performance, by rounding the Top 10 in 9th place.

Besides the circumstances, the rider were fairly satisfied with the results and now eyeing preparation for this years final round at Phillip Island Grand Prix Circuit. 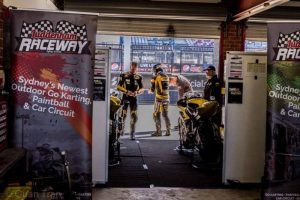 Finally, the day wouldn’t have been possible without the assistances of our team members, Josh Hall, Tony Kim, Jason Cornwell, Michael La,  Cheryl and Morgan. Thanks to Vic for taking cinematography footage, Quan Tran and Half Light Photographic capturing the moments, those who visited us and massive shout out to Meal Prep Madness for sponsoring all of us delicious meals!

After the qualifying sessions, Cambridge Olivier finished with a best time of 1:35:759, placing him 9th quickest. However, determination of this position on tomorrow’s grid remains undecided.

Cambridge was penalised to start tomorrows races at the back of the grid for attending an ARDC Ride Day, 7 days prior to the round. We were unaware that the ASBK regulation prohibits competitors to practice at the respective round venue within 8 days prior an event. This means we are in breach of it by 1 day. We believe the decision is unfair on numerous grounds and have lodged a formal protest submission. An independent hearing will occur at 7am tomorrow to determine if whether Cambridge starts in 9th or at the back in 24th. Lets hope ASBK – Australian Superbikes clear the penalty.

On a positive note, Thomas Bryden finished with a time of 1.35.939 scoring him 11th on the grid. Thomas was overall satisfied with the result seeing he had minimal track time this year due to injury.

After 3 FP Sessions, Cambridge Olivier concluded the day with a 1.36.753 and Thomas Bryden made his return with a 1.38.156. This puts them currently in P10 and P15 out of the 24 competitors. The pair look to increase their momentum at tomorrows all important qualifiers.