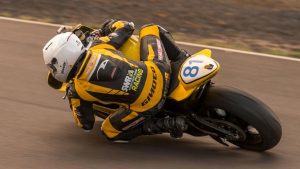 Round 5 Morgan Park Raceway finished up with a weekend of extraordinary racing and fine weather after rain scares on Friday afternoon.

Starting 9th on the grid out of 19, Cambridge Olivier finished Race 1 in 8th and Race 2 in 10th position. The launch off the line proved to be the main setback as first race Cambridge dropped back to 13th within first 2 laps. But perseverance and commitment enabled Cambridge to regain back to 8th position. This happened similarly in Race 2 but climbed back to 10th.

Overall, Cambridge finished in #8th place and took home 24 points! Next round is Eastern Creek in approximately 2 weeks where Cambridge set pole position in Qualifying last year and Thomas makes his return! 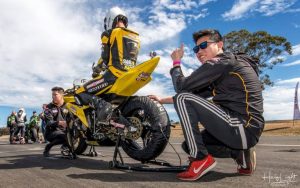 Cambridge full throttled into QS1 with a 1:17.526 but unfortunately low sided after attempting to line up a hot lap to conclude the session. Luckily, Cambridge was able to safely walk away (thanks to GIMOTO leathers) and the bike appeared to only suffer cosmetic damage. See video below for the on-board footage powered by EzViz Australia.

With new tyres, the time improved to 1:17.551 into QS2. However an undetected leaking of radiator from the earlier crash, prompted an almost near high side! Nevertheless, Cambridge will start in 9th position for tomorrows races.

FP2 was cut short after rainy weather halting the momentum from FP1. FP3 the weather went back in every riders favour but the session was red flagged due to a couple of crashes.

Nevertheless, in that limited time, Cambridge concluded the day 10th fastest with a time of 1:17:822.

Top and Bottom Photo: Taken by Half Light Photographic